Some comedy for your Saturday: Shaw and Lee, AKA The Beau Brummels. We saw this Vitaphone short on TCM last week, and were mesmerized by the duo’s Andy Kaufman-esque deadpan delivery of bad jokes and Vaudeville songs (stick with it for at least a couple of minutes!). Strangely modern, or in any case I gather from digging around that this was considered a bizarre, unique act at the time.

Always eat when you are hungry.
Always drink when you are dry.
Go to bed when you’re sleepy.
But don’t forget to breathe or else you’ll die. 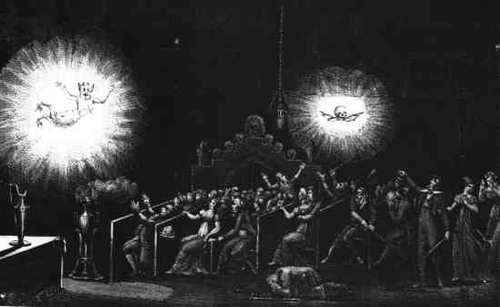 From Wikipedia (link): The Eidophusikon (Greek: Ειδωφυσικον) was a piece of art, no longer extant, created by 18th century English painter Philip James de Loutherbourg. It opened in Leicester Square in February 1781.